Using a TruFormARmature Skull I create a portrait of John Lovewell

I create a portrait in clay, using a bust armature from http:www.truformarmatures.com to create a portrait on John Lovewell, the direct descendant of Captain John Lovewell.
I've been commissioned to create a 1/2 life size bronze of a famous early American hero. Captain John Lovewell, who was killed by Abenaki Indians in a battle near Lovewell Pond.
John Lovewell (October 14, 1691 – May 8, 1725) was a famous Ranger in the 18th century who fought during Dummer's War (also known as Lovewell's War). He lived in present-day Nashua, New Hampshire. He fought in Dummer's War as a militia captain, leading three expeditions against the Abenaki Indians.
Lovewell was commemorated by Henry Wadsworth Longfellow with his poem, "The Battle of Lovells Pond", and by Nathaniel Hawthorne with his story, "Roger Malvin's Burial". 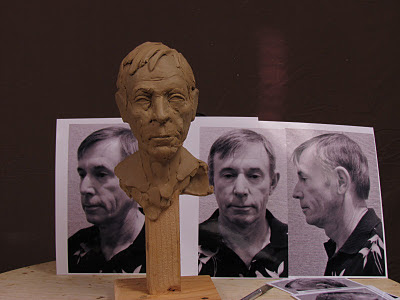 David, If you need any assistance in regards to hat/headgear or clothing from the period don't hesitate to ask. I have a decent library covering American Historical/military subjects from the 16th through the early 20th century. ~Gary

I wonder if you would like to do a piece/comment, on the impact on classical sculpting (if any), using technology (particularly domestic), such as ...

Gary, if you give me names of some books I need to get, I'd love to purchase them for my library..
Colonel... I think that modern day suppliers of pre made armatures will give so many a chance to sculpt and in turn learn to sculpt. I feel any tool is game for these days.

Just so satisfying to watch you sculpt, David! You really achieved the likeness very early. Did you take anatomy classes, or did you learn independently? Either way - fascinating!

Lori, no schooling. I did go to Utah State University for a quarter and a half, but when they attempted to have me turn my ability towards modern art, I told them to stick it.. and walked out. Never had second thoughts..
No, I'm pretty much self taught.