started Geronimo today. His face was the first step to capturing his likeness.
I'm using an 18 inch human armature for this figure that will sit on top of another armature of a horse by the same company.
If you wish to order armauters go to http://www.truformarmatures.com

Geronimo, born June 16, 1829 – February 17, 1909) was a prominent Native American leader of the Chiricahua Apache who fought against Mexico and the United States for their expansion into Apache tribal lands for several decades during the Apache Wars. Allegedly, "Geronimo" was the name given to him during a Mexican incident. His Chiricahua name is often rendered as Goyathlay or Goyahkla in English.
After an attack by a company of Mexican soldiers killed many members of his family in 1858, Geronimo joined revenge attacks on the Mexicans. During his career as a war chief, Geronimo was notorious for consistently urging raids and war upon Mexican Provinces and their various towns, and later against American locations across Arizona, New Mexico, and western Texas.
In 1886 Geronimo surrendered to U.S. authorities after a lengthy pursuit. As a prisoner of war in old age he became a celebrity and appeared in fairs but was never allowed to return to the land of his birth. He later regretted his surrender and claimed the conditions he made had been ignored. Geronimo died in 1909 from complications of pneumonia at Fort Sill, Oklahoma. 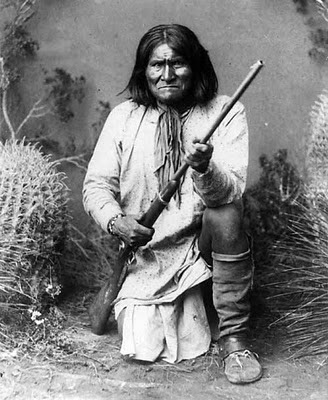