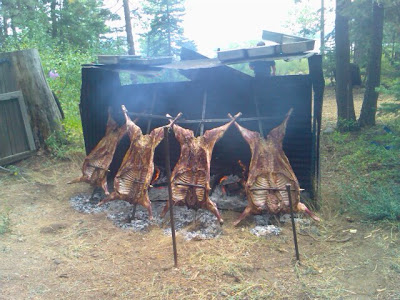 Yesterday afternoon was spent at a fund raiser dinner for the North Lake Tahoe Ski Foundation. It was held at the Quist Estate at Sunny Side on the west shore of Lake Tahoe. The dinner was prepared by an Olympic Skier from Argentina. He cooked 4 full lambs (shown above - I took this picture with my cellphone) in front of a hard wood fire, like they do in his home country. The meal was amazing.
There were many young, up and coming Olympic Ski Team hopefuls there and many Gold Medal Winners from the past that call Tahoe their home now. Among them, Franz Klammer. Klammer overwhelmingly dominated the downhill event for four consecutive World Cup seasons (1975-78). He was the gold medalist at the 1976 Winter Olympics in Innsbruck, winning the downhill at Patscherkofel in dramatic fashion. He won 25 World Cup downhills, including four on the Hahnenkamm at Kitzbühel.
Another Gold Medalist that was there, was Tamara McKinney. She raced on the World Cup circuit for 11 seasons, making her first podium at age 16, in December 1978. She won four medals in the World Championships; bronze medals in the combined (1985, 1987) and slalom (1989), and a gold medal in the combined at Vail in 1989.
While winning the overall World Cup in 1983 at age 20, she also won the giant slalom title, which she also had won in 1981. In 1984 McKinney won the slalom title, and took fourth place in the giant slalom at the Winter Olympics in Sarajevo.
I just wish I had photos and videos. I didn't take my camera because I wasn't even aware what this event was going to be. A lady took some photos there and took one of Klammer and myself. I'm still waiting for her to send them. When I get them, I'll add them to my blog.
Meanwhile, I had another Blue Jay evening.
CLICK HERE FOR VIDEO.
Posted by David Lemon Artist - David Lemon at 6:10 PM